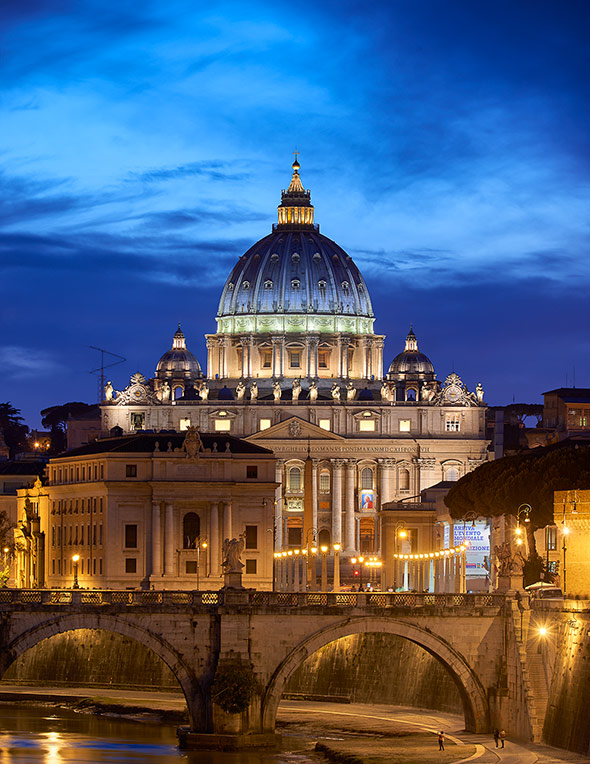 #There are 4 important churches you can’t miss:

St.Peter’s Basilica – A huge sanctuary of Christian religion. Its façade is 45 meters high, and its enormous dome is 136 meters. St. Peter’s Basilica, the largest church in the world, overlooks the square that carries the same name that was designed by Bernini and which is surrounded by a colonnade. Grandeur and majesty: this is the sensation that one gets walking up Via della Conciliazione towards Piazza San Pietro. One of the most important works of art inside is the “Pietà” sculpture by Michelangelo, that was created between 1498 and 1500.

Santa Maria Maggiore – This church stands on the Esquilino hill and is the first Roman church to be named after the Holy Virgin. Its bell tower is the highest in Rome. There is a story that this was the site where fragments of wood from Jesus’ crib were kept. For this reason, the church was called Santa Maria ad Praesepe for a certain period of time.

San Giovanni in Laterano – This is the Cathedral of Rome, the most important church after St. Peter’s. The first church was built in 314, when the Emperor Constantine gave the land to the Pope. The current building complex is made up of the Church, the Baptistery, Palazzo Lateranense, the Scala Santa and the Hospital of San Giovanni.

San Paulo fuori le mura – This church is in Via Ostiense and was founded in 330. It was only finished, however, in the 5th century. The Church was built on the wishes of Constantine, who wished to commemorate the Deacon Lorenzo, who became a martyr together with Pope Sixtus II in the middle of the 3rd century.

The Capitoline Museums – This museum, founded in 1471, houses findings and works of art that tell the full history of Rome, from the antique sculptures and bas-reliefs portraying the acts of the emperors to the paintings on show in the Picture Gallery.

The Vatican Museums – This group of museums is divided into several sections such as the Egyptian Museum, the Ethnological Museum, the Painting Gallery and the Raffaello Rooms to name a few. As well as the ancient artifacts, the Vatican Museums contain hundreds of works of art commissioned and collected by the Popes over the centuries and created by the most famous artists in history. The statue of Laocoonte in the courtyard of Palazzo del Belvedere is not to be missed.

Galleria Borghese – This is one of the largest collections in the world. The collection was begun in 1600 by the Borghese family; it was plundered by Napoleon at the beginning of the 19th century and then partly recompiled once more and was acquired by the State at the beginning of the 20th century. There are many works of art by painters and sculptors to see: Amor sacro e Amor Profano by Tiziano, la Pietà by Rubens, Davide con la testa di Golia by Caravaggio, Apollo e Dafne, David and Pluto e Prosperina by Bernini. 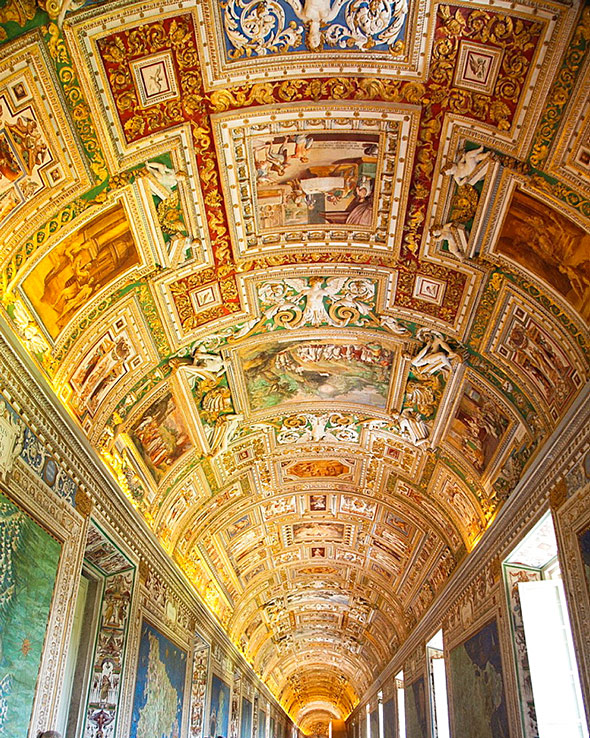 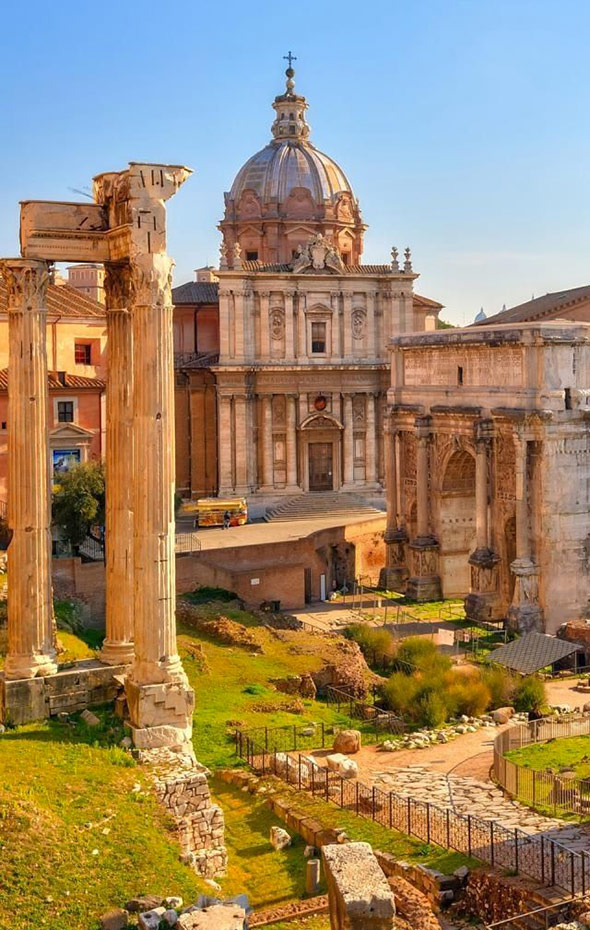 Pantheon – This is one of the best-preserved buildings that date back to ancient Rome. This building dates back to 27 B.C., but was partly destroyed and then rebuilt between 118 and 125 A.D. It later became a Christian place of worship where the tombs of Raffaello, Vittorio Emanuele II, Umberto I are still kept, The huge dome and the fine marble decorations inside the Pantheon are worthy of note.

Castel Sant’Angelo – The original building, dating back to 123 A.D., was very different from the one that stands on the site today. Around 1200, Castel Sant’Angelo became the property of the Vatican and a sort of fortified corridor was built to connect the building with the Vatican Palaces.

The Colosseum or Roman Coliseum — originally the Flavian Amphitheatre (Latin: Amphitheatrum Flavium, Italian Anfiteatro Flavio or Colosseo), is an elliptical amphitheatre in the center of the city of Rome, Italy, the largest ever built in the Roman Empire. It is considered one of the greatest works of Roman architecture and Roman engineering.

Occupying a site just east of the Roman Forum, its construction started between 70 and 72 AD under the emperor Vespasian and was completed in 80 AD under Titus, with further modifications being made during Domitian’s reign (81–96)The name «Amphitheatrum Flavium» derives from both Vespasian’s and Titus’s family name (Flavius, from the gens Flavia).

Capable of seating 50,000 spectators, the Colosseum was used for gladiatorial contests and public spectacles. As well as the gladiatorial games, other public spectacles were held there, such as mock sea battles, animal hunts, executions, re-enactments of famous battles, and dramas based on Classical mythology. The building ceased to be used for entertainment in the early medieval era. It was later reused for such purposes as housing, workshops, quarters for a religious order, a fortress, a quarry, and a Christian shrine.

Catacombs – The catacombs were the places where the early Christians celebrated funerals and where they were buried when they died. The catacombs, the oldest of which dates back to the 2nd century, were built outside the city walls.

Fountains and Squares you can’t miss:

Piazza Navona – This is a truly wonderful square to see. It has an unusual, elongated oval shape that is the same as that of the ancient Domiziano Stadium over which the square was built. The predominating style is Baroque and there are so many monuments and buildings to admire such as the Fontana dei Fiumi by Bernini, which is the base of the Egyptian obelisk in the center; Palazzo Pamphili and Fontana del Moro.

Piazza Venezia – This square was named in honor of the Republic of Venice that opened up its embassy in this very square. Piazza Venezia was unfortunately made famous when it became the stage for Mussolini’s speeches that he pronounced from the balcony of Palazzo Venezia, an imposing building that dates back to the second half of the 15th century. The Vittoriano, dedicated to Vittorio Emanuele II, is another important building.

Piazza di Spagna – This is maybe the most charming square in the city. Its unique shape, that narrows in the middle, reminds us of a butterfly. The square’s name comes from the fact that the Spanish Embassy stood in the square in the 17th century. The square is permanently full of tourists and as far back as 1600 it was the favorite place for visitors to Rome from all over the world. The steps that connect the Church of Trinità dei Monti to Piazza di Spagna are amazing, a mixture of curves, straight line and terraces, where it is possible to see the house of poets such as Keats and Shelley. 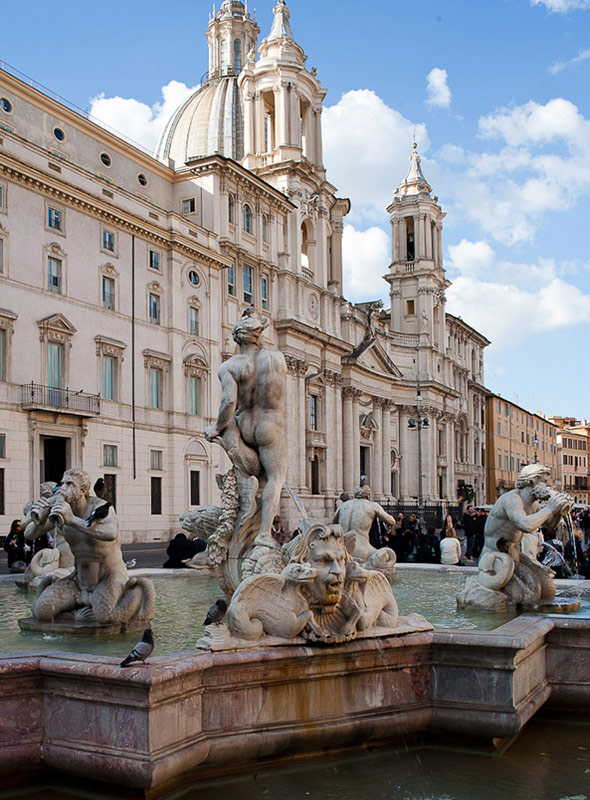